My Family's Own D-Day Story

Last week was the observance of the 75th anniversary of D-Day, the invasion of Normandy in World War II. We honored the brave soldiers, sailors, airmen, and others who took part in this historic event that lead to the liberation of Europe. But for me, Friday, June 14, 1944 is a pretty special day too. This week is the 75th anniversary of my dad’s first combat mission as a bomber pilot in the fabled Eighth Air Force.

Eight days after D-Day, my dad and the nine crew members of his B-24 Liberator bomber named I’ll Get By took off with 37 other B-24s from Debach, their airfield in England. The primary target was the German Luftwaffe’s airfield at Laon-Athes, in occupied northern France.

Only one of the 38 bombers was lost on that mission, hit over the target. That made it one of the less costly missions, as records show nearly half of all losses in the Army Air Corps were suffered by the Eighth— 47,483 out of 115,332 casualties in the entire Air Corps. More than 26,000 of the crewmen in the Eighth were killed. Out of 10,631 missions flown by the Eighth, 4,145 planes were lost. The 493rd Bomb Group, my dad’s unit, flew 158 missions, losing 41 planes, usually with 10 men per plane.

Having spent the first half of the war as a flight instructor, my dad was old compared to his peers by the time he arrived in England—on his first mission, he was two months short of his 26th birthday. He went on to complete 15 missions in the B-24, then six more on the B-17 Flying Fortress. His last was on Nov. 6, 1944, targeting a railroad yard near Neumunster, Germany.

When we were growing up, Dad didn’t talk much about the war. He just saw it as one phase of his life. He moved on to the next phase, using his GI Bill educational benefits to get a degree in electrical engineering. He and my mom raised four kids, and he worked for the same company until he retired as age 65. It was only then that he seemed to look back, and think about the war, realizing that he had been a part of something important, even historic. He and my mom started attending reunions not just of his unit, but also of the flight-training classes.

In 2000, my wife Lucy and I took our three kids to Europe and the Normandy American Military Cemetery. Armed with a list of every member of the 493rd Bomb Group who was buried there and where, we would find each of their graves, then place a cell phone call to my dad, and he would tell us about that particular airman.

He told us a story I had never heard about Jack Cooper, his best friend from stateside. My mom, dad and oldest sister had attended Jack’s wedding in El Paso, just before the two shipped out to England. Until the last decade of his life, my dad was a very unemotional man, but that day he spoke of the feeling of relief and accomplishment when they would land safely from a mission. But Jack was shot down on D-Day, his first mission, and lost in the English Channel, never to be found. Dad said that Jack never, even once, experienced that feeling.

Dad passed away in 2012 at the age of 93. Three years ago, on a trip to England, Lucy and I drove from London to Debach. A group of townspeople, mostly retirees, were painstakingly restoring the remaining buildings, to what they looked like during World War II. They also found and were scanning the records. One Sunday each month, except in the winter, the airfield is open to the public.

When we arrived unannounced one Sunday, a volunteer, Darren Jelley, greeted us, casually asking if we had any connection to the 493rd. When I responded that my dad had been a pilot there, he excitedly asked his name. When I answered, “Major Charles E. Cook,” the jaw of another volunteer standing nearby dropped. “I was just digitizing his records this morning,” she said. Reaching into a leather satchel, she pulled out a thick file folder with dad’s name on it. Among the contents were mission reports and other documents, as well as the photos displayed here. 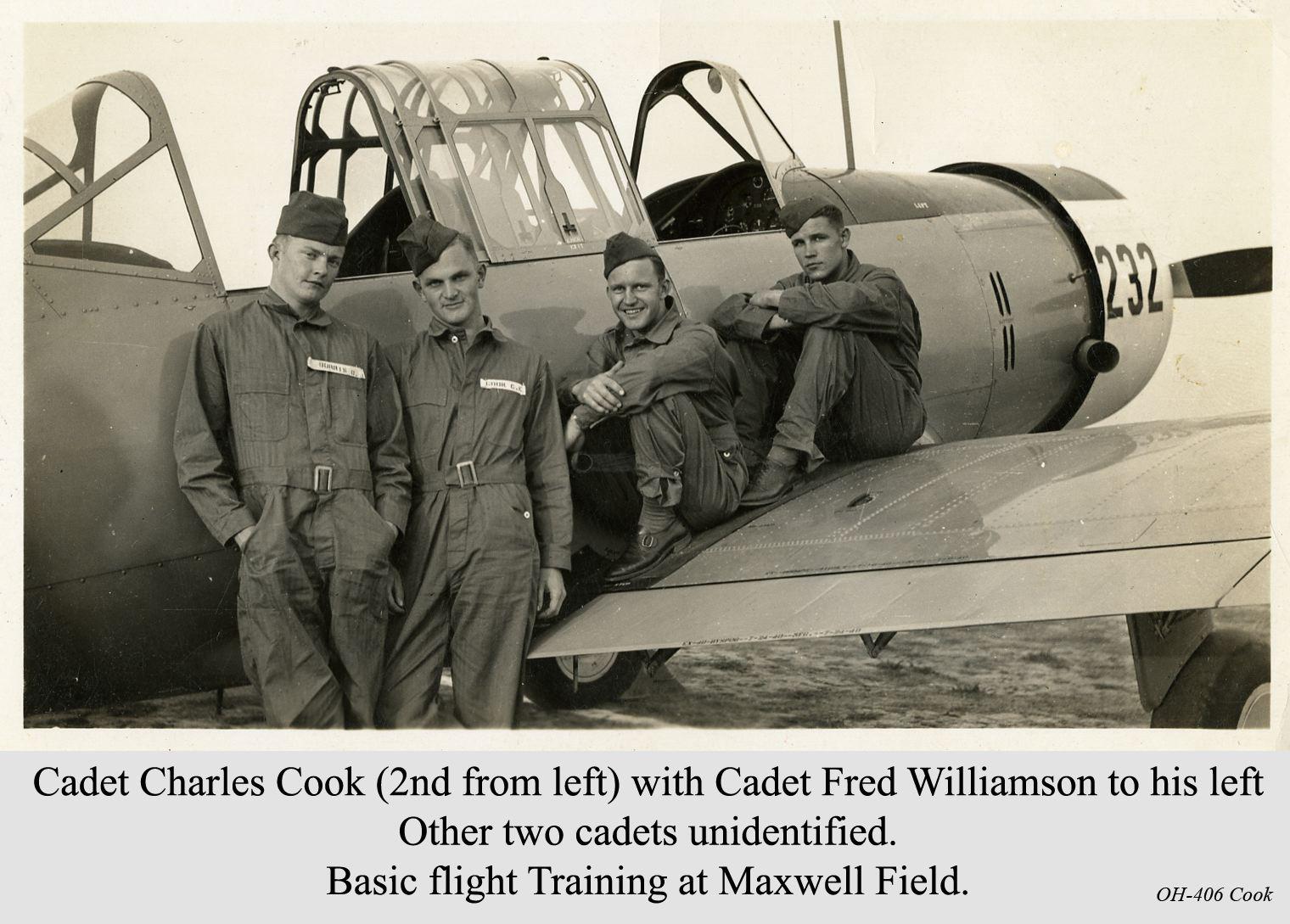 Walking through the buildings and around the airfield was mystical. In the room below the control tower, blackboards listed each plane, with its pilot’s name. There was the name “Cook.” Darren loaded us up in a car, driving to the end of the runway. Yellow rapeseed blossoms were everywhere, but you could see the outline of the runway. He said, “Charlie, this is the view your father had when he was about to take off.”

My dad completed 21 missions, but the mission that haunts me is one he didn’t fly. He had just been promoted to Air Commander, and he and his crew were transitioning to the B-17. On September 13, 1944, a dozen bombers from the C Squadron took off, their target the IG Farben chemical works in Ludwigshafen, Germany. Among the products IG Farben made (though not necessarily there) was Zyklon-B gas, used to commit mass murder in the concentration camps.

Ten of the 12 planes did not make it back, and the two bombers that did return were so badly shot up that they were scrapped for parts. About 120 young men took off on that morning; only 20 came back. But for a quirk of fate, I probably wouldn’t be here.

This story was originally published on nationaljournal.com on June 14, 2019

Republicans Underperformed in Districts That Biden Narrowly Won in 2020

Heading into the holidays, consider giving the gift of a Cook Political Report subscription. Perfect for colleagues… https://t.co/7EdwueLJlO