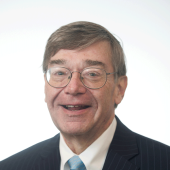 Charlie Cook is widely regarded as one of the nation’s leading authorities on U.S. elections and political trends. Charlie founded the independent, non-partisan Cook Political Report in 1984, serving as Editor and Publisher until August 1, 2021 when Amy Walter took over those roles, ownership and management of the venerable newsletter. Charlie will remain as a contributor to the renamed “Cook Political Report with Amy Walter.”

In addition to lecturing, Charlie will continue to write his weekly column and serve as a political analyst for National Journal. Cook is also a co-author of the 2020 and 2022 editions of The Almanac of American Politics.

Al Hunt in the Wall Street Journal has referred to Charlie as “the Picasso of election Analysis” while the New York Times has referred to the Cook Political Report as “a newsletter that both parties regard as authoritative.” In 2010, Charlie was the co-recipient of the American Political Science Association’s prestigious Carey McWilliams award to honor “a major journalistic contribution to our understanding of politics.” In 2013 Charlie served as a Resident Fellow at the Institute of Politics at Harvard’s Kennedy School of Government.

For speaking engagements, Charlie will continue to be represented by Leading Authorities Inc, as he has for over 30 years.