Demographic Change Since 2016 Alone Could Be Enough to Defeat Trump

Four years ago, Donald Trump won the White House while losing the popular vote by 2.9 million to Hillary Clinton, thanks to a near-perfect geographic vote distribution that allowed him to win big Electoral College prizes by razor-thin margins. The key? Trump's unprecedented 37-point margin among white voters without four-year college degrees, who are especially influential in the Upper Midwest.

But as America becomes more diverse and college-educated, Trump's core demographic is steadily declining. In 2020, non-college whites are on track to make up about 43 percent of the nation's adult citizens, down from 46 percent in 2016.

Meanwhile, whites with four-year degrees — who are trending blue and increasingly behave like a different ethnic group from non-college whites — will make up 25 percent of adult citizens, up from 24 percent in 2016. And Blacks, Latinos, Asians, and other non-whites — historically Democrats' most reliable supporters — will make up 32 percent, up from 30 percent four years ago.

A new interactive collaboration by NBC News and the Cook Political Report finds that if 2016's turnout and support rates were applied to 2020's new demographic realities, Trump would narrowly lose Florida, Michigan, Pennsylvania and Wisconsin — more than enough to swing the presidency to Joe Biden. And, Trump would lose the popular vote by about four points, roughly double his 2016 deficit.

But Trump might need to boost non-college white turnout by about five points — from 55 percent to 60 percent nationally — just to offset the impact of their dwindling share of the electorate and get back to the same 306 Electoral votes he won in 2016.

At the moment, Trump's bigger problem is that Biden is winning more non-college whites than Clinton did four years ago. The latest NBC News/Wall Street Journal poll shows Biden losing them by 23 points, whereas exit polls showed Clinton losing them by 37 points. That would be more than enough to offset modest gains Trump has made since 2016 among Hispanics and other non-whites.

Of course, race and education aren't the only prisms through which to examine the changing American electorate. Breaking down the electorate by age, for example, reveals something different: voters 65 and older — who narrowly supported Trump in 2016 — have become a slightly larger slice of eligible voters since 2016 as more Baby Boomers have aged into that category.

However, age isn't as straightforward: to put it gently, plenty of the oldest 2016 voters have since exited the electorate. At the same time, many 18-22-year-olds, who overwhelmingly dislike the president, have entered. And today, polls consistently show Biden doing several points better with seniors than Clinton, while Trump's support is concentrated among voters between the ages of 50 and 64.

To estimate the impact of changes in population, turnout and support on the Electoral College - and how states move (or don't) together — we've created an interactive tool that allows you to "swing the vote" and create your own November scenarios. But to start, here are five of our own:

Five Scenarios to Swing the 2020 Vote

For years, Democrats have dreamed of breaking Republicans' grip on increasingly diverse and metropolitan Sun Belt states. In this scenario, Biden turns out enough non-whites and wins over enough college-educated suburban whites to wrest Arizona, Florida, Georgia, North Carolina and Texas from Trump's column (in addition to Michigan, Pennsylvania and Wisconsin) — for a landslide victory. 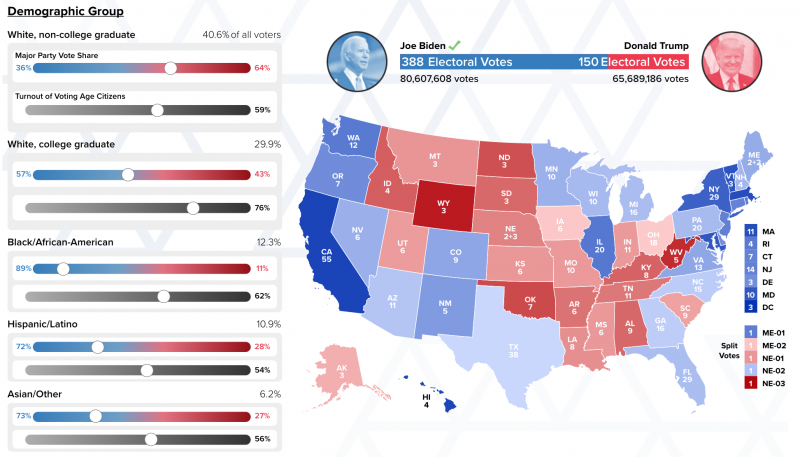 In 2016, Democrats' "blue wall" of supposed Great Lakes strongholds crumbled. But Biden could resurrect the coalition he and Barack Obama built if he wins a higher share of white working-class votes than Clinton and restores Black turnout to Obama-era levels. In this scenario, Biden wins all 26 states Obama carried in 2012 — including Iowa and Ohio — and picks up Arizona and North Carolina. 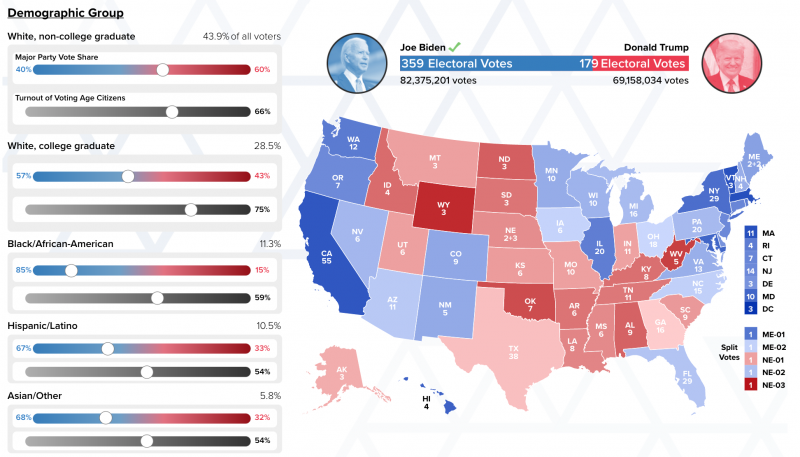 In the 2018 midterms, Democrats' route to the House majority ran through high-income suburbs populated by white college graduates. If Biden were to replicate those gains, he could prevail, even if Trump matches or slightly exceeds his own 2016 numbers among other groups. In this scenario, Biden narrowly wins by flipping Arizona, Michigan, Pennsylvania, Wisconsin and Nebraska's 2nd District. 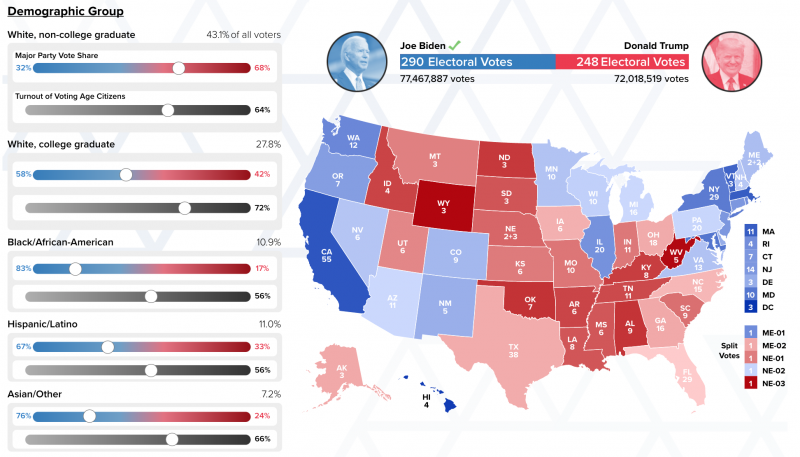 4. Democrats Relive 2016 Nightmare All Over Again

Today, Biden is seeking to build on Democrats' advances in the Sun Belt and reverse erosion in the Upper Midwest. But Trump could also turn out enough non-college whites to foil those plans. In this scenario, Biden wins the popular vote by a full five million votes (three percentage points), but flips only Nebraska's 2nd CD, worth one Electoral vote. Trump comfortably wins the Electoral College, 305 to 233. 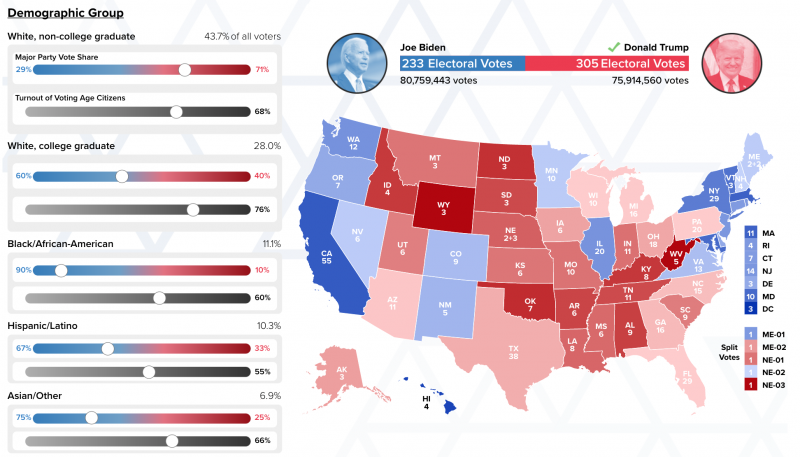 One bright polling spot for Trump this year has been stronger support among non-white voters — particularly Latinos — than he received in 2016. If he were to combine those gains with 2016-level support among whites, he could actually improve on his showing. In this scenario, Trump holds all 30 states he won in 2016 and even flips Nevada red — narrowly winning the popular vote too. 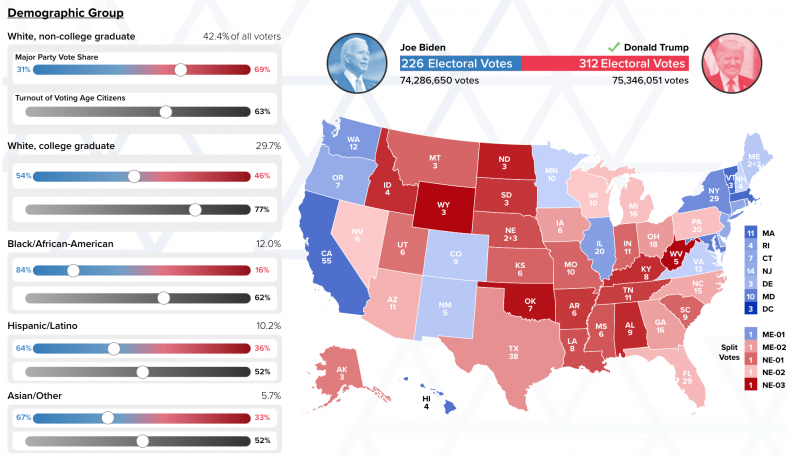 RT @Redistrict: Here's my *very* rough sketch of the non-NYC districts (but including the Staten Island/Manhattan #NY11) proposed in the Ma…