A consistent theme in American politics, particularly over the last 60 years, has been continuity versus change. If things are going well, stay the course. If things are not going well, it’s time for something new. This column recently cited James Carville’s immortal words written on a whiteboard in Bill Clinton’s 1992 presidential campaign headquarters: “It’s the economy, stupid.” The column made the case that, since then, social and cultural issues like abortion and guns, as well as characteristics like gender and education, had largely supplanted the economy as the major motivator in politics.

A few days later, I got a text from Carville saying that he agreed with my column, but he reminded me that the economy line was actually the second part of what he had written in that war room in the Little Rock headquarters. The first part, less famous, was “change vs. more of the same.” In fact, he recalls, there was even a third saying on the board—“and don’t forget health care.”

Continuity prevails when voters—or at least a critical mass of them—feel good about how the country is doing. Change wins out when a majority of voters are not happy. A chart put together by a Republican campaign consultant, who for obvious reasons would rather remain unnamed, measures this via an age-old poll question, usually worded something like: “Generally speaking, do you think that the country is headed in the right direction or is off on the wrong track?” Ronald Reagan’s legendary pollster Richard Wirthlin popularized the metric, even calling it “the Dow Jones indicator of American politics.”

The consultant's chart listed the last 10 presidential elections. The left side of the page lists the five elections when the electorate chose to invite a new party into the White House: 1980, 1992, 2000, 2008, and 2016. On the right side are the years they voted to reward the incumbent party with another four years: 1984, 1988, 1996, 2004, and 2012. In the five elections on the left when voters chose change, the average “right direction” number was just 24 percent, against a “wrong track” average of 70 percent. For the five elections when the "in" party stayed in, the average "right direction" was 42 percent, "wrong track" 49 percent. 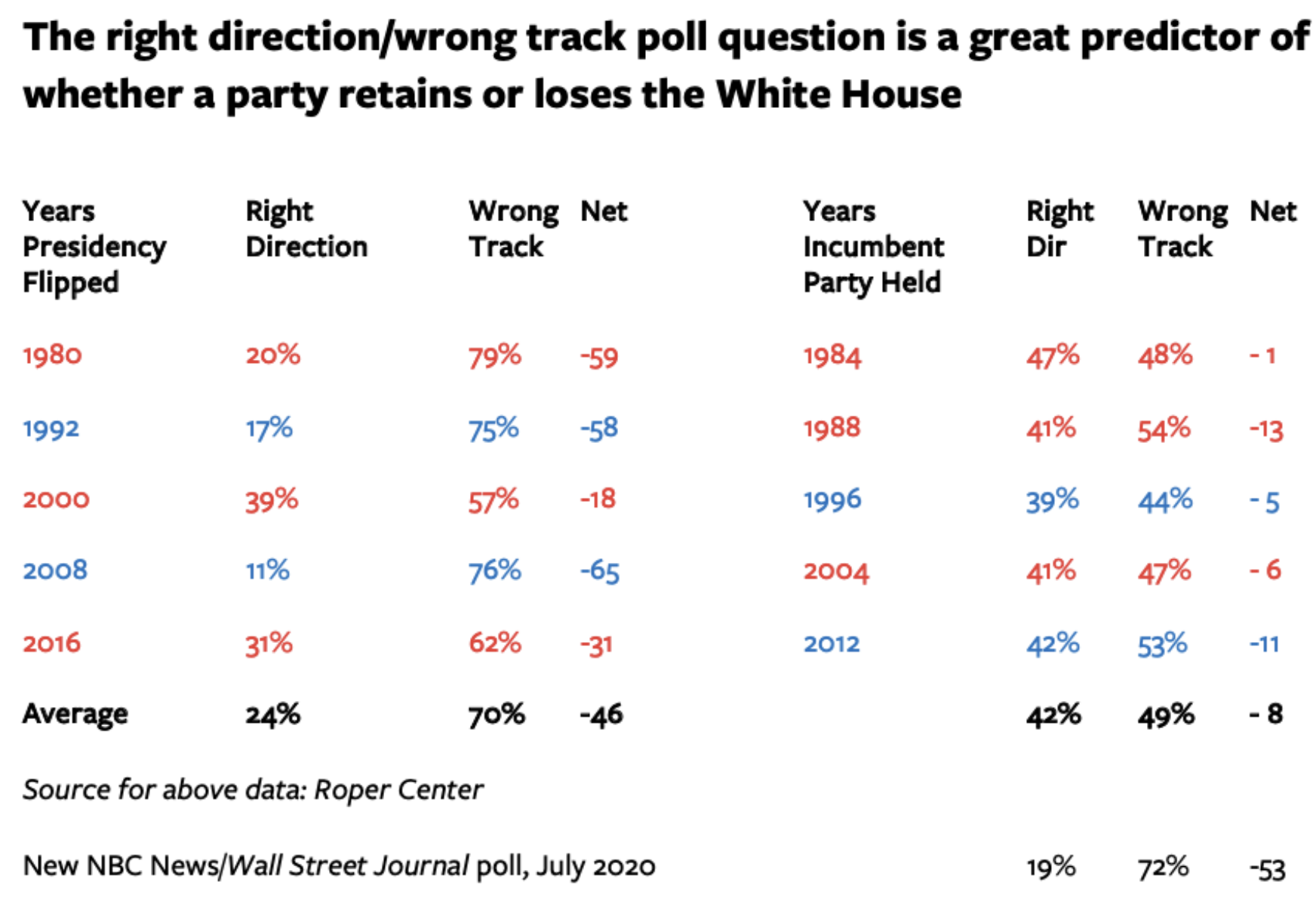 So, where do we stand today? In the new NBC News/Wall Street Journal poll conducted by Public Opinion Strategies and Hart Research, "right direction" was a dismal 19 percent, compared to a "wrong track" of 72 percent, for a net minus 53 points. These are numbers screaming for change, and unlike four years ago when Donald Trump was running against a party that had held the White House for eight years, he is seeking a contract renewal and representing the status quo. Joe Biden is the candidate of change, even if it is a change back toward normal. Indeed, a different Republican strategist summed up the mood of the electorate as hoping for someone to make their lives normal again.

Looking at the two major national polls that came out in the first three days of this week, that NBC/WSJ survey showed Biden leading President Trump by 11 points, 51 to 40 percent. A Quinnipiac University poll had the Biden lead even wider at 15 points, 52 to 37 percent. Trump’s approval ratings were upside down in both, by 14 points in NBC/WSJ, and a whopping 24 points in Quinnipiac.

For the longest time, investors and bettors assumed that President Trump would be reelected. After all, elected incumbents usually get reelected. And strong economies, like the one we had before March, reelect incumbents.

Many pollsters and political analysts felt otherwise, knowing that when an incumbent president is up, it is a referendum on that incumbent. Even a year ago, Trump was extremely vulnerable and faced an uphill challenge getting reelected.

Many are now asking the question, “What does President Trump need to do to turn around his reelection prospects?” But that question is predicated on an assumption that there is something that Trump can do.

The electorate can be divided into three groups: those who love Trump and/or his policies, those who despise him and/or his policies, and the “in-betweeners.” The movement among independents and swing voters away from Trump since the beginning of April suggests that between his handling or mishandling of both the coronavirus pandemic and the civil unrest after the killing of George Floyd, swing voters may have hit the mute button on Trump, if not flipped the on/off switch.

One Republican consultant we spoke with this week said that crises were an opportunity for a president or governor to demonstrate executive leadership. Crises don’t seem to be Trump’s strong suit; indeed in the minds of many voters, the twin crises were a test for Trump, and for anyone outside of his base, he failed both.

Americans know that the leader of the free world has access to a vast network of intelligence and diplomatic professionals, military leaders, scientists, and other experts, second to none. In the current moment, not listening to Anthony Fauci and a parade of other pros is unwise. Attacking or denigrating those with more expertise and more credibility is even more ill-advised.

The idea of a Trump turnaround was often premised on a V-shaped recovery with a quick economic bounce-back. With this new wave of coronavirus cases and shutdowns, the chances of that happening seem even more remote.

Candidates can also typically count on a bump of about a half-dozen points after their conventions, but with nothing remotely like a normal convention happening this year, that also seems unlikely. Pro-Trump folks seem to be hanging their hat on their guy winning the debates, painting a picture of Biden as a senile old man and their candidate as a vigorous specimen who defies age. What they may not be taking into account is that Biden is far more experienced at debates than Trump and that the incumbent will have to face serious questions from reporters who may want to put him on the spot.

Sure, there may be opportunities for a candidate to turn this around, but that would need to be a candidate who is disciplined, who can find the strongest possible message and stick to it. In short, Trump does not appear to be a good candidate for that rebound.

This story was originally published on nationaljournal.com on July 16, 2020