There are new Senate ratings in five states. Updated bottom lines for these races are below. Our full ratings chart can be found here. 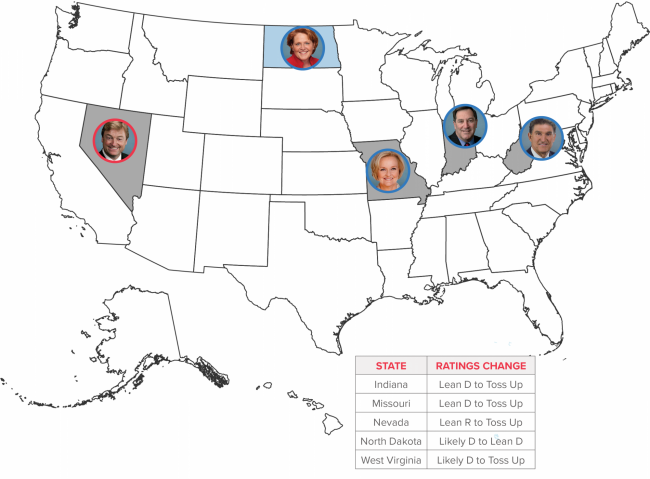 In 2012, Democrat Joe Donnelly, who was then in the U.S. House, was considered an underdog in this Senate race where he was supposed to face long-term GOP U.S. Sen. Richard Lugar, but Lugar lost his primary and Donnelly’s opponent became then-state Treasurer Richard Mourdock. Mourdock won with the support of tea party activists, but stumbled out of the primary with a series of impolitic remarks about partisanship, abortion and rape, and never recovered. So even while then-President Obama lost the state, Donnelly defeated Mourdock, 50 percent to 44 percent. In 2016, President Donald Trump carried the state by 19 points while Republicans also won an open U.S. Senate seat, the Governor’s office and six of eight congressional districts. This puts Donnelly high on Republicans’ target list this cycle. Republicans will host a competitive primary between U.S. Reps. Luke Messer and Todd Rokita, state Rep. Mike Braun, attorney and staffer to former U.S. Sen. Dan Coats Mark Hurt, and Purdue Polytech director Andrew Takami. Businessman Terry Henderson and state Attorney General Curtis Hill are also considering bids. Democrats hope to benefit from a crowded and potentially ugly primary. It is worth remembering that Republicans held a competitive race in 2016, but it had no impact on the general election. It is very hard to see how Donnelly does not get very competitive race this cycle. The contest is in the Toss Up column.

Democratic U.S. Sen. Claire McCaskill won this seat in 2006, a very good year for Democrats nationally, with just 50 percent of the vote. When she was up for re-election in 2012, McCaskill hoped to avoid another nail-biter of a race by influencing the outcome of the Republican primary in order to pull a weaker opponent. With television and radio ads, and some help from the DSCC, she succeeded as then-U.S. Rep. Todd Akin prevailed in an eight-way field with 36 percent. McCaskill believed that Akin was too conservative as a general election candidate, even by Missouri standards, and there was ample evidence that he was a weak campaigner and a mediocre fundraiser. But, Akin managed to exceed Democrats’ expectations when shortly after the primary he argued that victims of “legitimate rape” don’t become pregnant because “…the female body has ways to try to shut that whole thing down.” And that was the end of the race despite the fact that it was only the third week in August. McCaskill took 55 percent to 39 percent for Akin; a Libertarian got 6 percent. She isn’t likely to have as easy a path to re-election this cycle. It is not certain that Republicans can avoid a primary, but they aren’t likely to let McCaskill and Democrats dictate the terms. And while the Democratic incumbent understands what a fine line she walks in a Republican-leaning state, the electorate has become even more conservative since 2012. In 2016, President Donald Trump carried the state by 19 points, as Republicans won a U.S. Senate seat and every statewide office on the ballot. The most interesting and surprising development in this race so far has been U.S. Rep. Ann Wagner’s decision not to run. Her announcement left Republicans working to entice state Attorney General Josh Hawley into the race; he has formed an exploratory committee and is widely expected to run. Libertarian activist Austin Petersen has announced his candidacy and state Rep. Paul Curtman has formed an exploratory committee. The 37-year old Hawley is likely to unite the party and will give McCaskill a very tough race. The race is in the Toss Up.

U.S. Sen. Dean Heller has the unfortunate distinction of occupying the most vulnerable of the 10 Republicans seats up this cycle. His vulnerability stems largely from the fact that he is the only Republican incumbent facing voters next year who is sitting in a state that Democratic presidential nominee Hillary Clinton carried in 2016. Conversely, that also means that he is Democrats’ only real target and the party, which is in desperate need of pick-up opportunities to offset their own vulnerable seats, are throwing everything they have at him. But before Heller can focus on his Democratic opponent, he must first survive a primary challenge from Danny Tarkanian, who is running to the incumbent’s right. Tarkanian has unsuccessfully sought a number of offices in the last 12 years, including the U.S. Senate and House, the state Senate and Secretary of State. Heller needs to take Tarkanian seriously, despite his losing record. The frontrunner for the Democratic nomination is U.S. Rep. Jacky Rosen, who was elected to Congress in 2016, beating none other than Tarkanian. U.S. Rep. Dina Titus is also looking at the Democratic primary, but most observers expect her to pass. Heller is well acquainted with close races; he won this seat in 2012 by just over 10,000 votes, but this may turn out to be a tougher race as he is under siege from both Democrats and conservatives in his own party. The contest is in the Toss Up column.

U.S. Sen. Heidi Heitkamp is in an unenviable position; she is a Democrat sitting in a state that President Donald Trump carried by 36 points and is a member of a Senate minority doing everything in its power to oppose Trump and Senate Republicans. That’s the bad news. The good news is that she is well known statewide and votes her state’s priorities as much as she can. She won this seat in 2012 by less than 3,000 votes against then At-Large U.S. Rep. Rick Berg, who was a less than stellar candidate. While Heitkamp was eking out a win, GOP presidential nominee Mitt Romney carried the state by 19 points. Republicans would like to see At-Large U.S. Rep. Kevin Cramer run. Cramer succeeded Berg, winning a third term in 2016 with 69 percent, and would give Heitkamp a very competitive contest. Cramer has been slow to make a decision, allowing state Sen. Tom Campbell to jump in the race ahead of him. While Campbell isn’t as well known as Cramer, his profile as a successful businessman has some appeal to voters. Now that Heitkamp has a credible opponent, the contest is in the Lean Democrat column, at least until Cramer announces whether he will run.

On the one hand, U.S. Sen. Joe Manchin should be the most vulnerable incumbent up this cycle given that he is a Democrat representing a state that President Donald Trump carried by 42 points. On the other, Manchin has accumulated a very moderate voting record and seems in sync with voters, and thus has solid job approval and favorable ratings. He was elected to the Senate in a special election in 2010 with 54 percent, and then won a full term in 2012 with 61 percent. Republicans are intent on testing theory of presidential performance – that which party wins a state in the presidential contest plays a major role in determining the outcome of a Senate race. They have two first-tier candidates seeking the GOP nomination: U.S. Rep. Evan Jenkins and Attorney General Patrick Morrisey. Former coal industry worker Bo Copley is also running. Either Morrisey or Jenkins will give Manchin a competitive general election, but the early weeks of the campaign suggest that it will be a very contentious primary. The contest is in the Toss Up column.